I had a great weekend thanks to the run I took part in on Saturday. Well, I am using the words « took part in» very loosely as I didn’t really run, but at least I was there to cheer the winners up when they were receiving their trophies!

The event, called Run for a Cure, was organized by CSDON (Child Survival & Development Organization in Nigeria). It is held every year around October-November to bring awareness to Cancer and raise fund for treatment.

It is an occasion I am always looking forward to, as it is really fun to run on the streets of Lagos, even under the rain: this is the third time I am joining in, and each time, the rain is pouring down!

Our first year, some of my friends lost their phones to the rain because they kept them in their pockets where they were not protected at all against the water. I don’t know how I managed to save mine!

This last Saturday was no different. In fact, it rained heavily in the early hours as I was driving to the venue, at Muri Okunola Park, and it was quite scary.

But seeing all those people running together is really thrilling, there is a kind of togetherness you feel in the air that is very energizing.

So energizing in fact that it gave me the boost I needed to start writing again on this blog. The following day, I was up at 7am, which is very early for me on a Sunday! And I wrote my post on Thomas Sankara, a true African leader.

We were all there, united against this terrible disease, but the atmosphere was not sad at all, it was a meeting full of joy and helpful in so many ways.

To those who are affected by this heart-breaking ailment, let me just say the following words that I read on the tee-shirt of one of the participant:

And to think that the route of the race this year was going through Lekki-Ikoyi bridge, and I missed it! I promised myself that next year I will not only put on my trainers, but I will actually run!

Learn more about Run For a Cure and CSDON.

Here are some pictures of the event:

(Sorry, but I could not put a name under each picture which I know is the best thing to do and ironically I am the one who is always critical of blogs that do not mention the names of people in their pictures. I will do better next time! )

For those of you who live in Nigeria, if you look carefully (and you can click to enlarge the picture) , you will recognize among others : Mr Donald Duke and his wife, Mrs Onari Duke, and Mo Abudu of EbonyLifeTv. 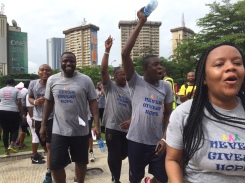 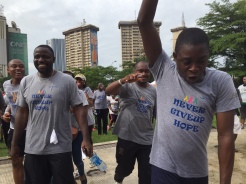 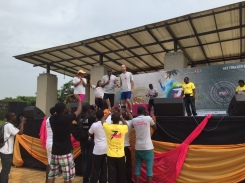 3 thoughts on “Run For a Cure”